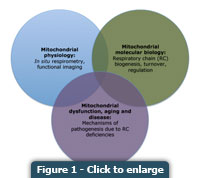 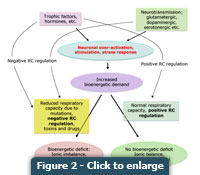 To understand how mitochondrial dysfunction could lead to disease, please see our working model on the "bioenergetic basis of neurodegeneration" in Figure 2. This model is based on our previous study showing that pathological overactivation of neurons could lead to full use of their spare respiratory capacity (Yadava & Nicholls 2007 This model proposes that even a very minor impairment of the oxidative phosphorylation could be detrimental under conditions of acute high-energy demands. Although it is possible that multiple mechanisms could play roles in mitochondrial dysfunction-mediated pathogenesis, our data suggest that the "bioenergetic deficit" could be a major driving factor in diseases of tissues with high bioenergetic demands. A clear difference can be seen in cancer, wherein mitochondrial dysfunction provides survival advantages to cells.

Yadava N, Potluri P, Scheffler IE. Investigations of the potential effects of phosphorylation of the MWFE and ESSS subunits on complex I activity and assembly. Int J Biochem Cell Biol. 2008;40(3):447-460.

Potluri P, Yadava N, Scheffler IE. The role of the ESSS protein in the assembly of a functional and stable mammalian mitochondrial complex I (NADH-ubiquinone oxidoreductase). Eur J Biochem. 2004;271; 3265-3273.

Member of the Society for Neuroscience (SFN) 2005 to present